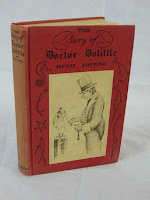 Coming in a close second, a very close one, to the Oz books are the Dr. Dolittle series. I have been totally enthralled by all things Puddleby (the town that Dr. Dolittle calls "home") since I read the first one over four decades ago. The first collection of books I seriously tracked were older (including a first edition) copies of all of the titles. My desktop design and photography business is cheerfully labeled "DoLittle Designs." (Very fitting, since I "do little" with it quite a lot of the time)

I really wish that the Eddie Murphy movies had never been filmed. They totally ruined the original idea of Dr. Dolittle (perfectly casted in the 1967 film version starring Rex Harrison) in the minds of anyone who hadn't read the books or seen the original movie yet. Dr. Dolittle was portrayed in the books as a man definitely ahead of his time. He walked that fine line between realizing that animals are sentient...and still not becoming a vegetarian. He was a pacifist, but when the time called for it, he had a deadly aim with a gun.

The first book, The Story of Dr. Dolittle was introduced in 1920 and the last in the series (Dr. Dolittle's Puddleby Adventures) was published after Hugh Lofting's death, in 1952. All in all fourteen books featuring the loveable pudgy physician reached the shelves of hungry-minded children (and adults) around the world. They are as entertaining and interesting today as they were almost a hundred years ago. Truly timeless, no matter your age there's nothing quite like escaping into the world where two-headed Pushmi-Pullyus exist and a grumpy white duck named Dab-Dab has a job as the clinic receptionist for the amazing and amusing Dr. Dolittle.

The books were actually published a bit out of chronological order but since each one stands alone, it doesn't really matter. (To keep things in order, read the 5th book after the first one)

To learn more about all things "Dolittle" check out The Puddleby Page.

To order The Story of Dr. Dolittle free for your Kindle, click HERE.
Posted by Unknown at 8:24 AM

Welcome to my library!

My personal library shelves groan with research and "just for fun" books collected over the last few decades and my Amazon Cloud is getting in danger of floating too close to the ground with the weight of the almost 1500 books waiting for me to "Fire" them up.

These days I am in a new reading phase, trying to support and learn more about the massive numbers of independant (indie) authors that have arrived on the e-scene. As a published writer myself (of non-fiction books, feature articles in national magazines and local newspapers and a couple of as-yet-unpublished novels) I know how hard it is to be heard above the ocean of voices on the tide of new books arriving every day.

In my humble opinion, writers of above-average quality stories should be applauded and those of lesser quality should be urged to fix what's wrong and give it another try. These pages will contain my opinions of books I've read. Whether you agree or not, I'd like to hear your opinion. If you plan on reading it after reading my review let me know that too. Anyone can comment and guest reviewers are welcome!

Back to the bookshelf...

I've gotten some rude private comments about my inclusion of editing errors in my review.

No, I'm not a Word Nazi. No, I am not an overeducated know-it-all (in fact, I have no formal education on the subject). No, I'm not being condescending.

What I AM is a reader that is tired of being jarred out of a wonderful story by errors that any editor should have caught. On the first draft. Certainly before the final one. An error or two is acceptable. That happens in print books sometimes too. But, beyond that....?

Yes. It DOES matter. To more people than you think. The English language is being slaughtered by texting and emailing. Children today have very few good role models when it comes to understanding proper grammar, spelling and word use. When they read published books that include errors it confuses them even more. AND, it does jolt most readers out of the story. Which can delete a star or more from the reader's final review rating.

That is why I include a head's up about glaring errors. And will continue to do so.

I read in the Kindle format, on either an early model keyboard or a Fire (I love curling up with my nice warm Fire!)

Thus, my reviews include links to order books from Amazon.com which will be in the Kindle format. If you have the link to the book in other formats, please share them!