Somewhere Over the Rainbow

There's nothing like an empty piece of paper or a computer screen with its accusatory cursor blinking away to make your mind go blank. It seemed like such a cool idea to begin an "opinions" blog about books I've read. But, when suddenly do the math and realize that you read about ten books a week and you've been alive a few decades...well, that quickly becomes a pretty daunting task. So, to get my groove going I'm going to start with my all-time favorite(s). And mix in a few of my current reads.

Of course, any list of my favorites has to not only include but start off with....can you hear the drum roll in background....The Wizard of Oz series.

Most people aren't even aware that there is indeed a series and for them the story stopped when the credits rolled at the end of the movie. But...Frank Baum's imagination was far too great to stop there. Prequels, sequels and stand-alones abounded over the years from the familiar Wonderful Wizard of Oz to the final page of Glinda of Oz. Glinda, in fact, was published after Mr. Baum died, and I think some of the wistfulness and darkness of this last book was likely due to a sudden glimpse of his own mortality. Along with the realization that there wasn't really an Oz after all and he wasn't going to get the chance to share the rest of his dreams and imaginings with more generations of children. For a complete list of his works (staggering in number as well as quality) and a biography of the man who created this delightful world to which children and adults can escape as easily in 2012 as in 1900 when they were first published, click here.

Other titles in the series include: 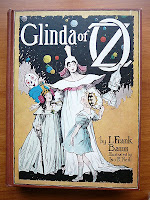 In my opinion, every lesson to be learned, every dream to be dreamed and ever fantasy to be fullfilled was within the pages of these books. I have the entire set (far from first edition, but just as valuable to me) of Oz books, and I consider them one of my greatest assets. Not worth much on the open market, but whenever the real world gets a little TOO real, I know I can go where bluebirds fly over rainbows and troubles melt like lemondrops.

Available now for the Kindle, the entire Oz collection can be purchased for ninety five cents. Certainly the bargain of a lifetime. Click Here to purchase from Amazon.
Posted by Unknown at 6:18 PM

Welcome to my library!

My personal library shelves groan with research and "just for fun" books collected over the last few decades and my Amazon Cloud is getting in danger of floating too close to the ground with the weight of the almost 1500 books waiting for me to "Fire" them up.

These days I am in a new reading phase, trying to support and learn more about the massive numbers of independant (indie) authors that have arrived on the e-scene. As a published writer myself (of non-fiction books, feature articles in national magazines and local newspapers and a couple of as-yet-unpublished novels) I know how hard it is to be heard above the ocean of voices on the tide of new books arriving every day.

In my humble opinion, writers of above-average quality stories should be applauded and those of lesser quality should be urged to fix what's wrong and give it another try. These pages will contain my opinions of books I've read. Whether you agree or not, I'd like to hear your opinion. If you plan on reading it after reading my review let me know that too. Anyone can comment and guest reviewers are welcome!

Back to the bookshelf...

I've gotten some rude private comments about my inclusion of editing errors in my review.

No, I'm not a Word Nazi. No, I am not an overeducated know-it-all (in fact, I have no formal education on the subject). No, I'm not being condescending.

What I AM is a reader that is tired of being jarred out of a wonderful story by errors that any editor should have caught. On the first draft. Certainly before the final one. An error or two is acceptable. That happens in print books sometimes too. But, beyond that....?

Yes. It DOES matter. To more people than you think. The English language is being slaughtered by texting and emailing. Children today have very few good role models when it comes to understanding proper grammar, spelling and word use. When they read published books that include errors it confuses them even more. AND, it does jolt most readers out of the story. Which can delete a star or more from the reader's final review rating.

That is why I include a head's up about glaring errors. And will continue to do so.

I read in the Kindle format, on either an early model keyboard or a Fire (I love curling up with my nice warm Fire!)

Thus, my reviews include links to order books from Amazon.com which will be in the Kindle format. If you have the link to the book in other formats, please share them!